I think it’s a great idea to focus your adventures on something exciting, whenever possible.  For those of us in New York, this week will mark Pope Francis’ first and historic visit to New York.  It coincides with the UN Assembly, so the city is awhirl and gridlock will be at an all-time high.

“The best and most beautiful things in the world cannot be seen or even touched.  They must be felt with the heart.”  Helen Keller

Most days, New York is in full gear and locked in its well-known high energy mode.  But for special events like the ones coming to our fair city this week, the electric frequency levels burst into full-on rocket liftoff mode!  And the excitement it generates is unparalleled. 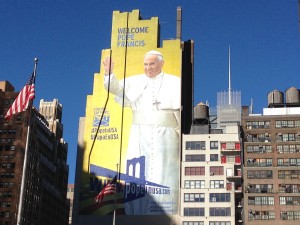 At times like this, you can literally “feel it in the air.”  So I decided over the weekend, to make this week my “Pope Project” and try to visit some of the places the Pope will see, while he’s here.  I also find that the preparations for such events are just as exciting as the events themselves.  And when you create a special project for yourself, such as this one, it gives you a full agenda for any and all time that you have on your own. 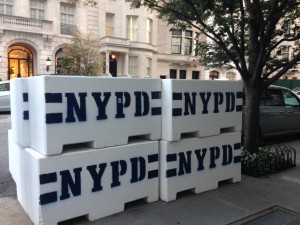 NYPD “blocks” all over the city in preparation for a whirlwind week ahead!

From the giant billboard hand-painted last week on a building near Madison Square Garden, where the Pope will say Mass, to the smallest detail of hand-hung “no parking” signs on the trees of the street where he will stay, you can see the anticipation take hold.   There are honestly no contenders, in my mind, when it comes to the NYPD.  And evidence of their hard work is already visible all over the city too.  In anticipation of the crowds that will gather, starting on Thursday, there’s fencing, cement blocks, street closure warnings and all sorts of other indicators of what’s ahead for both the force and NYC residents! 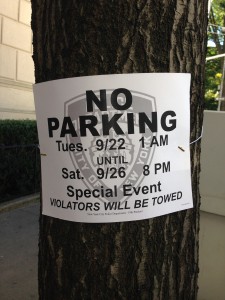 Signs of preparation for the Pope and the UN Assembly this week!

No doubt all of the media will be out front covering the Pope’s every movement.  But I find it really exciting to capture the week from my own humble perspective.  Although I tried to get tickets to see him in Central Park or along his journey down Fifth Ave., I didn’t win any of the many lotteries that were held.  So, now, I have a really perfect “A Table For One” week ahead, as I document my own experience.  Maybe I’ll get lucky and catch a glimpse of him somewhere along his many routes.  But if not, just getting out and about to see the preparations and experience the city as it lights up in anticipation is really very special.  I think everyone should take on a special project once in a while, to enjoy their time with “A Table For One.”

A Table For One