The Pope’s visit to the United States was amazing.  In New York, the effect was electric.  On his return to Roma, he was asked by reporters to describe the cities he had visited in the U.S.   Washington, he described as “formal”, Philadelphia, “friendly”.  But for New York, he found it necessary to create a new word for his experience!

“Loving your language means a command of its vocabulary beyond the level of the everyday.”  John McWorter 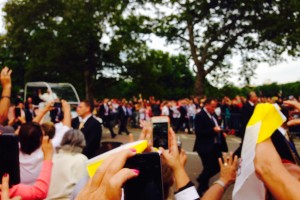 The Pope called his experience in New York “Stralimitata.  Roughly translated, it means “beyond all limits.”  I think a lot of us who live here and lots of folks from all over the world, who visit New York would agree!  And it’s a great way for us to describe his visit to New York as well! 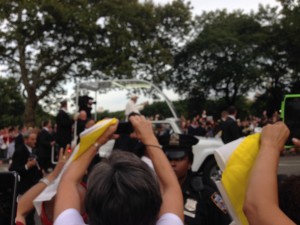 At the last minute, I received a ticket to his quick drive through Central Park, on his way to the Madison Square Garden Mass.   It was startling and moving.  So many people of so many faiths joined in celebration.  This particular part of his journey included all the people of New York, all faiths.  The tickets were not only available to New York Catholics, the city was in control of most tickets, for anyone who wanted to attend. 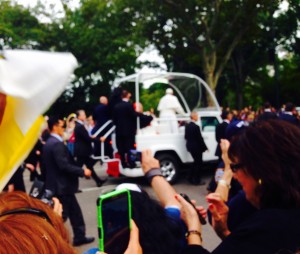 A Day To Remember! Pope Francis in Central Park

I felt torn between receiving his blessing in the open and photographing him as he passed by.  So I did both.  I put my phone down as he passed in front of me and then picked it back up as he proceeded forward.  So the photos are a bit blurred, but the experience of Pope Francis in New York remain forever clear and bright!

A Table For One